Carmela Arzuaga Vita is a 33 year old Qom (Toba) woman. She lives in Namqom, a peri-urban village of approximately 5000 Qom residents, just outside the capital city of Formosa, in the Formosa province of Argentina. Carmela has four children. The oldest is 16, and the youngest is three. Her first two births were at home, and the last two in a hospital. 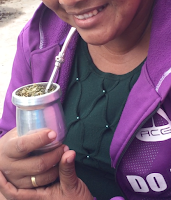 Melanie recorded, transcribed, and translated the interview. The translation below is an excerpt of the full conversation as relayed and transcribed in Spanish. 'Carmela' is an alias, as requested by the narrator.


Carmela: My first birth was at home. My grandmother who is now dead was there. She helped me. Actually at this birth two older women helped me. I didn’t want to go to the hospital because at that time I was a minor and I was very scared of going to the hospital.

Melanie: You were 15 years old?

Carmela: Yes…and the baby was born [at home] and everything was fine, but they still took me to the hospital.

Melanie: After the baby was born?

Carmela: Yes, she was born and they checked her out, but then I fled the hospital [laughs].

Melanie: After how many hours?

Carmela: This was in the emergency room, I didn’t stay there. It wasn’t hours, more like they took me there and then [makes a fleeting gesture with hand]…then I came back here.

Melanie: And you left with your baby?

Carmela: Yes, yes…they began to check out my baby there, in the room, everything. But now I regret everything because at that time I was young and my mother told me things, and I obeyed her. And this was my mistake because by fleeing the hospital I lost the right to be a mother. At the time, I was very convinced… it made me very scared. You know when you are young, they scare you, they tell you things…and I was scared that I would lose my baby in the hospital or that they would take her from me, and this scared me and that’s why I fled.

But afterwards, my mother took the baby as her own. She took custody of her because I was a minor and she told me that I couldn’t do it. But at the same time I agreed to give up my baby. But she told me “For right now I will take custody of your daughter, but after 8 years I’ll give her back to you.” But it didn’t happen like that.

Melanie: She stayed with your mother?

Carmela: Until now. But I took care of her, gave her milk, breastfed her for two years.

Melanie: So your mother was living close by with your daughter?

Carmela: Yes, yes, yes but afterwards she made me mad. It seemed like she had her own plans, I don’t know. And she demanded money for her, demanded money. But she never…she hardly ever put her in her diapers or bought them, and I would leave the house very angry with my mother. She made me crazy! Yes, but that was all with the first birth [drinks mate].

Melanie: One question about the birth: when did your labor pains start and how long did they last?

Carmela: The pains started at 9 months, which is very rare in a young girl, because supposedly they start at 8 months. And I was… I was bleeding I guess, and my grandmother delivered the baby, the baby was born fine. They cut the cord, everything….but it wasn’t like…its like the first time always seems very painful. And I’ll tell you that with the first birth, the truth is I was scared….I don’t know where I got the strength [laughs]. But yes [drinks and passes mate].

Melanie: And who was the other woman who helped you?

Carmela: The other woman was also my grandmother. She’s alive still, but she lives in the interior.

Melanie: Okay then. Can you talk about the last birth? Which was 3 years ago?

Melanie: And what happened when the labor pains started with this birth, until when you arrived at the hospital and…?

Carmela: At that time I wasn’t having any pains, no.

Melanie: You just went to the hospital to have the baby?

Carmela: I went because I was losing a lot, there was a lot of liquid, but it wasn’t blood…like my placenta broke but I wasn’t bleeding. And I went and they told me that, yes, I had to have a cesarean because the baby could be strangled.

Melanie: The doctor did an exam?

Carmela: Yes, it seemed that, I don’t know, the cord was wrapped around [gestures with hands around her neck] and she was 'seated' [breech], and if she was born 'seated' she wasn’t going to be born. That is what they told me, that’s why I had to have an emergency cesarean.

Melanie: But your baby was fine afterwards?

Carmela: Yes, she was fine after she was born. She weighed 3.8 kg.

Melanie: And she was nursing fine, once she was with you?

Melanie: When did they gave her to you? When you got up from the operation?

Carmela: No, they gave her to my mother. She was with my mother for a night. No, no it wasn’t a night. When I left the operating room she was there. She gave me the baby so that I could nurse her, and afterwards she left and after that I had to take care of myself, get up by myself. But it was very hard, because imagine walking like that, with a cesarean you can’t get up. But you have to get up, because that’s the only way to leave the hospital quickly. Because if you stay there screaming it could be worse, the doctor will keep you for another day in the hospital [drinks mate].

A nurse told me: “you have to get up even if it hurts, you have to get yourself up. If not they’ll make you live here.” And I didn’t want to stay. I had two other kids at home to take care of [laughs], yes [drinks and passes mate].

Sofia: So you had milk after the cesarean? To give her?

Carmela: [shaking her head] No, no.

Sofia: It caused problems for you?

Carmela: One day and one night.

Melanie: That you didn’t…like nothing?

Carmela: [shaking her head] She was crying and I couldn’t do anything. I was like a dead person, it was very bad.

Melanie: And how long did it take for you….

Carmela: I had to buy diclofenac [an over-the-counter nonsteroidal anti-inflammatory]. Diclofenac is like something that, when you take this drug, you feel good. Me, when I take it, I’m good…and one has to get up. The entire time, it was diclofenac that gave me strength. I didn’t feel any pain then.

Flor: What was the most beautiful thing about the birth? There is always suffering, but what is something beautiful?

Carmela: Something beautiful is when you hold your baby and look at her and she seems so small. You think that she depends on you and no one else to grow well…yes. Yes, that is the satisfaction of a mother. That is what makes me happy now, no? Watching her, how she grows [smiles]. Yes, very happy. Aside from the suffering….. always, I’m thinking of her, that’s it.